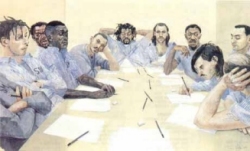 Inspired by the thought of inmates passing their sentences engrossed in creative activity and leaving prison with a new perception of the world, Lucy Willis spent two years teaching an evening class once a week at HMP Shepton Mallet.

In 1991 I had the opportunity to take an evening class in art at my local prison at Shepton Mallet in Somerset, a category C prison with inmates serving between six months and five years. About six men came to my first class. When I had given my introductory preamble, shown them a portfolio of my work and talked a little bit about the importance of drawing in art (as I would to any class of beginners). I gave everyone paper and pencil and a brown plastic flower pot which I had brought from home. I tried to explain that this simple form was ideal for learning to draw from observation and although it might look boring in fact there was a real challenge involved.

After a few awkward moments one of the class was kind enough to tell me that there was a factory workshop in the prison which produced... brown plastic flower pots. Most of my class had been turning them out all day.

So I didn't exactly get off to a flying start, although one or two men did have a go at a sketch and I promised them more exciting subject matter in the future.

What I didn't expect when I arrived the following week was that only one of my previous group turned up and a totally different lot drifted in. I hadn't fully realised that the prison evening classes are entirely voluntary. There is no enrolment and you only attend if you feel like it.

Hastily recovering from this blow to my ego I had to decide what to do. Should I give my introduction again? Then one of the inmates came to my rescue with a folder of drawings he had been working on for months in his cell. Many of the pictures were copied from magazines or posters, many of them were pornographic, but that didn't worry me. Here was a man who was keen to draw. 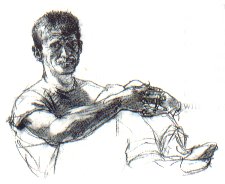 He wanted to improve his figure drawing so I suggested that someone should sit for us and we would try drawing from life (and to hell with first principles). With only a little grumbling the group tentatively began to sketch the first eager model, holding his pose like a statue. I started a charcoal drawing of my own and as it progressed one or two of the men got up to have a look, standing behind me and making encouraging comments.

By the end of the session most of my group, plus a couple of men from soft toy-making, were watching me. When I later apologised to the education officer for the lack of results she assured me there was no problem: to have a group of inmates quietly watching an artist at work was a rare thing and not to be discouraged. She made a photocopy of my drawing and gave it to the sitter. 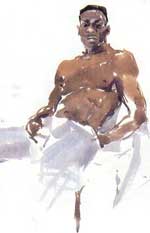 By the third week news had begun to get round. Several of the same men were back and one or two new ones were asking if I would please draw them this week.

As time went on I became totally relaxed about teaching the men to draw 'properly'; I realised I would need more than an hour and a half a week for that. Armed with a bundle of magazines, art books, charcoal, pastels and paints each week I got everyone round the table started on something — copying a photograph or working from their imagination — and gave them help and encouragement when it was required. It was increasingly more gratifying to see the men compliment each other on their work and I saw people swell with pride; people who had rarely been praised for anything before.

But usually somebody uttered the despondent refrain of, "I can't draw, Miss" so, if all else failed, I would sit them down and draw their portrait. These portraits often became the subject of much attention and discussion amongst inmates and prison officers alike. Seeing it done demystified the whole process and made the idea of drawing more accessible.

One day a man asked me what he should draw and I told him to do something powerful about prison. He drew in a corner by himself mumbling periodically '...something powerful'. Later he handed me a drawing of a prison cell with a beam of sunlight streaming in from a high window. On the floor beneath the sunbeam sat a man with his head in his hands.

In time I got used to the transitory nature of my group. I would enjoy several weeks with a nucleus of regulars before one by one they would be released, or be suddenly transferred to another prison without warning, or simply get weighed down by the pressures of prison life.

Just before Christmas a friend and I went in for a whole day with a painting project in mind. We took a poster of Picasso's Guernica with the idea to enlarge it to wall size by means of squaring up, each man taking a square to copy on a larger scale. Throughout the day the powerful image gave rise to a heated debate about whether Picasso was "out of his head". To begin with the general feeling was that as a painting it was complete rubbish, but by the end of the day they had become more appreciative of the artist's attempt to express deep anguish in paint. The enlargement was a triumph of team work and the group were justifiably proud of their achievement.

My original ideas about teaching prisoners to draw had been long-since abandoned. But towards the end, when I was spurring the men to produce work for an outside exhibition, I had a flurry of activity from a young man who suddenly got the hang of perspective. He had been doing lots of very careful copies from wildlife magazines when I suggested he draw the view down the prison corridor. He cottoned on to the idea of a vanishing point immediately and I encouraged him to try another perspective drawing during the week; wherever you look in prison there is perspective. The next week he came bounding up to the education block with a rolled sheet of A1 paper in his hand: the beginning of a full-blown perspective drawing of 'the wing' showing diminishing rows of cell doors, receding walkways, the lot. It took a few weeks but when it was finished it was the best observational drawing I could have wished for. Shortly after that he was released and a few weeks ago I was gratified to be asked to write a job reference for him.

My experience at Shepton Mallet was invigorating but also depressing. People end up in prison for all sorts of reasons and I feel strongly that for some, those who have fallen through the net of our educational system, prison could and should offer a second chance. The raising of a person's self-esteem can be a vital key to the successful rehabilitation of offenders and, as many people realise, the creative arts have an important role to play here.